Press release and images on Dilmah School of Tea - Enlightening the world on all things tea! from Dilmah

HomeNewsDilmah School of Tea - Enlightening the world on all things tea!

Dilmah School of Tea - Enlightening the world on all things tea! 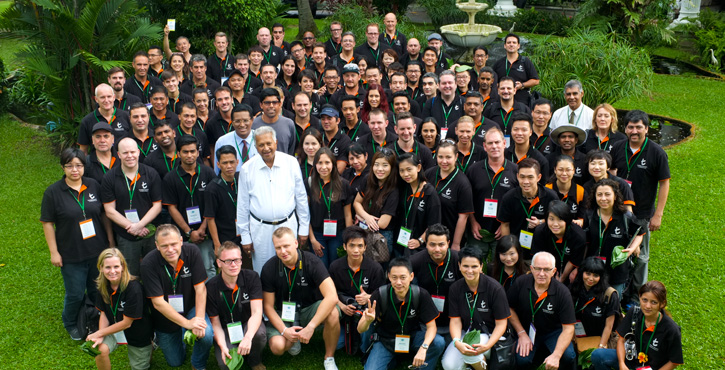 The Dilmah School of Tea opened its doors of wisdom to the world of gastronomy from the 20th - 23rd November 2014. The event was spread across a number of event venues in Sri Lanka with the participation of over 90 enthusiastic culinary professionals from around the globe.

The program began with the participants being escorted to the Rilhena estate where the journey of tea commences. Amidst exclamations of joy and wonder, the groups headed up the rocky path to the estate in safari trucks, mesmerized by the beauty that surrounded them. This was followed by a visit to the tea factory where the groups were briefed in detail about the elaborate manufacturing process that goes into rendering each tea, an identity of its own.

On the 21st of November, the participants were welcomed warmly through the doors of the Home of Dilmah in Peliyagoda by the Dilmah Family where they were taken on a tour through the premises and the entirety of the production process. 'When you leave this country, you will leave after an education on tea which no one in the world has acquired. We are rediscovering tea, reinventing and redefining quality tea. You will learn all that and you will come to admire the work we do, particularly the sharing of our resources with the poor the disabled and the disadvantaged.' said Founder Merrill J. Fernando on addressing the participants on a welcoming note.
After a scrumptious lunch of cr

Day 1 of the School of Tea formal sessions at Blue Waters Wadduwa sought to enlighten the participants on the history of tea, sensory evaluation and an interactive session on how to brew the perfect cup of tea. 'It's about sharing a vision. It's not simply about either a brand message or just a general introduction to tea. It is as my father says, about taking tea beyond the cup' Dilhan stated on welcoming the participants. They were also treated to a 15 course lunch tea pairing featuring the Silver Jubilee Gourmet range that explored just a modicum of the infini-tea that truly is tea. This was followed by an introduction and a tasting of the Seasonal Flush, a unique tea that is created when all elements of nature come together in perfect unison ' a product that is veritably a miracle of Mother Nature.

The last day of the School of Tea commenced with a delightful breakfast pairing of which the hero was definitely tea. An enlightening session on terroir was conducted by Oenologist Edwin Soon while Dr. Tissa Amarakoon reiterated on the health aspects of drinking tea with the floor being opened to questions from the participants. An exciting interactive session on mixology with Robert Schinkel soon followed with an introduction to the Real High Tea Challenge of which the global challenge will be taking place in May 2015.

The finale of the School of Tea was marked with the remarkable presentations of the participants composed out of all that they had learnt from the sessions. All six presentations from the six groups showcased the very pinnacle of creativity. As Dilhan remarked, 'School of Tea has expanded remarkably, especially with the affiliation with the Paul Bocuse Institute. Since then we have forged alliances in different countries around the world. Our friends from New Zealand will have from next year a degree course in tea at AUT in Auckland. Tea is changing. Tea is undergoing a renaissance. And this is something my father has believed in from the beginning.'

Knowledge truly does inspire passion. It was plain to see that all those who had been part of the School of Tea took home a wealth of knowledge and memories to last a lifetime. As one of our participants (Real High Tea Challenge winner from Netherlands) Vilmos Balint from Niet van toepassing (NVT) commented 'The School of Tea program was above my expectations. I am thrilled about how one man can step up and bring his dream to reality to build a significant future for those less fortunate. What I learnt during School of Tea is simply put ' wow! My knowledge of tea was pleasantly tripled in this short time of 4-5 days!'