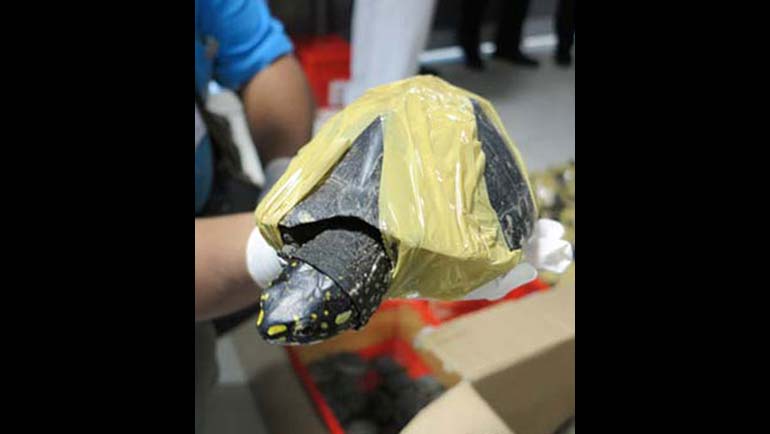 Kuala Lumpur, Malaysia, 23rd May 2014 – Illegal international trade of the Black Spotted Turtle in Asia has escalated over recent years and immediate action is required to stem the flow, a new TRAFFIC report has found.

The attractive spotted visage of the Black Spotted Turtle Geoclemys hamiltonii may well be its downfall. The species is known to be traded for meat, medicine and pets, although TRAFFIC’s research attributes the sudden rise in demand to the exotic pet trade.

Over 1,960 animals were seized between January 2008 and March 2014. Of these, 95 % were confiscated in the final 15 months of that period. A seizure of another 230 turtles on May 14th underscored the seriousness of the threat. Royal Thai Customs officers in Suvarnabhumi International Airport found the turtles packed in unclaimed bags which had come in on a flight from Kolkata, India.

Seizure information indicates that shipments of the turtles from Bangladesh, India and Pakistan transit through South-east Asian hubs such as Bangkok and are destined for East Asia, in particular Hong Kong. Most of the seizures are from passengers using commercial airlines concealing animals in their baggage. The majority of couriers caught were arrested but only two of the 22 cases recorded resulted in successful prosecutions.

“Enforcement authorities’ efforts to detect and apprehend smugglers are commendable, but a lack of follow-on investigations and prosecution is undoing their good work,” said Dr. Chris R. Shepherd, Regional Director for TRAFFIC in Southeast Asia. “It is high time for wildlife criminals to be appropriately dealt with for the serious offences they are committing.”

The Black Spotted Turtle is protected under national laws in its range countries and is listed in Appendix I of the Convention on International Trade in Endangered Species of Wild Flora and Fauna (CITES). All commercial international trade in this species is illegal.

The report recommends improving enforcement and prosecution through multilateral and multi-agency coordination. Timely and detailed reporting of seizures to the CITES Secretariat and in the media, together with the outcomes of successful prosecutions, are also urged.

“Wildlife enforcement networks already exist in South and South-east Asia, but given the transnational operations of the criminal networks they are up against, the challenge is to ensure a fully coordinated global enforcement response to their activities is delivered,” said Dr. Yannick Kuehl, Regional Director for TRAFFIC in East and South Asia

Next week, Viet Nam hosts the 9th Meeting of the ASEAN Wildlife Enforcement Network in Hanoi, at which Strategic Action Plan Development will be discussed, alongside the Special Investigations Group approach on key wildlife trafficking issues linking South-east Asia and other trading partners.

“TRAFFIC hopes our targeted analysis of trafficking routes will assist the region’s Wildlife Enforcement Networks in planning enforcement actions aimed at breaking the lines of supply and demand,” said Shepherd.

TRAFFIC’s findings were released today, World Turtle Day, to highlight the plight of the Black Spotted Turtle and many other species of turtles worldwide, particularly those in Asia which are under threat mainly from habitat loss and over-exploitation for food, medicine and the exotic pet trade.

“Turtle species are seriously threatened – nowhere more so than in Asia with 17 of the 25 most critically endangered tortoises and freshwater turtles on the IUCN Red List found in the region,” said James Tallant, Senior Programme Officer – Species, IUCN Natural Resources Group, Asia.

“IUCN is working with partners across Asia, including TRAFFIC to stem the tide of biodiversity loss. It is very good to see the plight of turtle species being brought to international attention on World Turtle Day. We hope this leads to greater understanding and effective conservation action worldwide.”