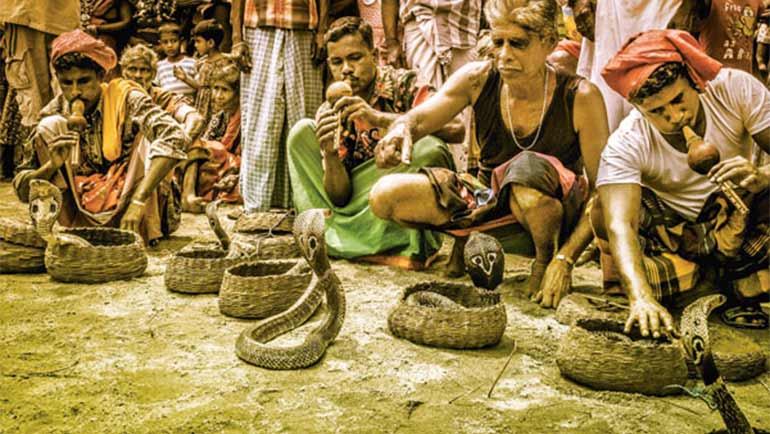 Sri Lanka is a small island where many minority communities live contributing to its cultural and ethnic diversity. The gypsies or the nomadic community is a minority ethnic group that enriches the cultural diversity of Sri Lanka. As the term suggests, gypsies live a nomadic lifestyle moving from one place to another to engage in their livelihood. Locally, they are known as Ahikuntika, Kuthadi, Kuravaor Nayi Panikkiya.

The Ahikuntika community has distinct characteristics that differ from other communities. Their chief means of living are snake charming, monkey performing and soothsaying. In the past, where there were lesser avenues of amusements, they travelled across the country with their luggage and paraphernalia stacked on the backs of donkeys. They carried monkeys and snakes to entertain people. They had no permanent houses to stay, so they put up small tents or huts on barren or abandoned lands.

However, the present generation of the Ahikuntika community has abandoned its traditional way of living and merged with the majority community. Nowadays it is hard to find them wandering on roads and streets with performing monkeys, and blowing a big flute to charm cobras. They were also famous for reading palms and forecasting the future.

Although gypsies generally move from one place to another, present day Ahikuntika families seem to be an exception. Most of them live in permanent houses in the North Central and Eastern Provinces. They are scattered in areas such as Kudagama and Kalawewa in Thambuttegama Division in the Anuradhapura District, Aligambay and Siriwalli Puram in the Ampara District and Andarabedda in the Kurunegala District.

The Ahikuntika community is believed to have been descended from the people of Andra Pradesh in India. However, due to rapid development, they have lost their identity. The technological advancements and development projects launched by the government have resulted in changing their lifestyle. In the process, their traditional customs and practices too have vanished. A major factor for the change of their lifestyle is the non-availability of bare lands where they could put up their tents for a few weeks or months.

When members of the gypsy community found it difficult to live according to their traditions, they made several complaints as well as requests to the government highlighting their plight. Subsequently, in 1969, the government made arrangements to settle them at Nochchikulam in the Vavuniya District. Ending their nomadic lifestyle, Ahikuntika community began to live in permanent abodes, yet they did not give up their livelihood of snake charming, monkey performing and soothsaying. The Ahikuntika males left homes for their accustomed livelihood with their snakes and monkeys leaving the other family members at home. Gradually, they adapted themselves to the mainstream culture and lifestyle.

Although they are traditionally known as Ahikuntikas, the government has registered them as 'Sri Lankan Thelungu' people.

Anavaththu is one of the few members of the Ahikuntika community who is still engaged in the traditional livelihood. He is performing monkeys and charming snakes at Sigiriya. "My family lives in Kalawewa, but I cannot find any employment there and that is why I came to Sigiriya where a large number of tourists arrive. I entertain tourists and earn my living by performing monkeys and charming snakes," he said.

Anavaththu said his father accompanied him to the jungle during his childhood to catch snakes. Anavaththu who had no formal education had engaged in the traditional livelihood since his childhood. "My children do not know how to charm snakes. They are in fact afraid of them because they are not exposed to the traditional means of living," remarked Anavaththu saying that the present generation has a tendency towards looking for other employments.

"Many of the youths are engaged in various employments other than our traditional livelihood. However, we have managed to give our children a good education and that is a good sign of the social development of our community. But it also leads to the dwindling of our culture," said Anavaththu.

The mother tongue of the community is Thelungu, but they are also fluent in Sinhala. "We speak in our mother tongue Thelungu at home. Our children are studying in the Sinhala medium. We are fluent in these two languages," Anavaththu noted.

Although the community has its roots in the Andhra Pradesh in India where the majority are followers of Hinduism, there are Buddhists among the Ahikuntikas in Sri Lanka. Anavaththu, the present leader of the Ahikuntika clan takes pride in claiming that he is a Buddhist.

They also worship certain deities such as Angates Sami, Masamma, Kannamma Sami and Sallipuramma. Many of them have converted themselves to Christianity due to the support extended by the church.

Visiting the new Thelungu village in Mahakanadarawa, Mihintale we found out that the inhabitants were provided with permanent houses by the former Minister S.M. Chandrasena in 1999. There are about 35 families living in the 'New Thelungu Village' at Seeppukulam, Mihintale. The livelihood of the majority of Ahikuntika males in the village is centred on fishing while the females are engaged in soothsaying and witchcraft.

Many of the Sri Lankan Thelungu people who dwell in Seeppukulam, Mihintale are Buddhists while some have embraced Christianity. Devotees of Kali Amma are also found in the village. Although, these people are provided with permanent abodes, they still struggle for sustenance.

The annual tribal convention of Ahikuntika is known as the Variga Sabha and the community had managed to hold agrand Variga Sabha at the bank of Rajangana River in Anuradhapura in 2011 for the first time after a lapse of 60 years with the sponsorship of Dilmah Conservation. "Members of our clan from all corners of the country took part in the Variga Sabha to discuss the challenges and problems faced by the community and put forward our proposals for uplifting and preserving the identity of the community," said Anavaththu.

"This Variga Sabha is regarded as one of the landmarks of our community," said Anavaththu stating that the clan made it a point to meet annually after the Variga Sabha in 2011.

In a bid to preserve the culture, tradition and the distinct livelihood of the shrinking community, the Ahikuntika Resource Centre (ARC) was set up at Kudagama, Thambuttegama in Anuradhapura with the intention of making the Ahikuntika village a tourist hub. The ARC has an open air theatre to display their traditional livelihood such as snake charming, monkey performing and a museum to house the traditional Ahikuntika arts and crafts. It was set up by the Divisional Secretariat of Thambuttegama in collaboration with Dilmah Conservation and the Department of Architecture of the University of Moratuwa making its contribution with the design and construction.