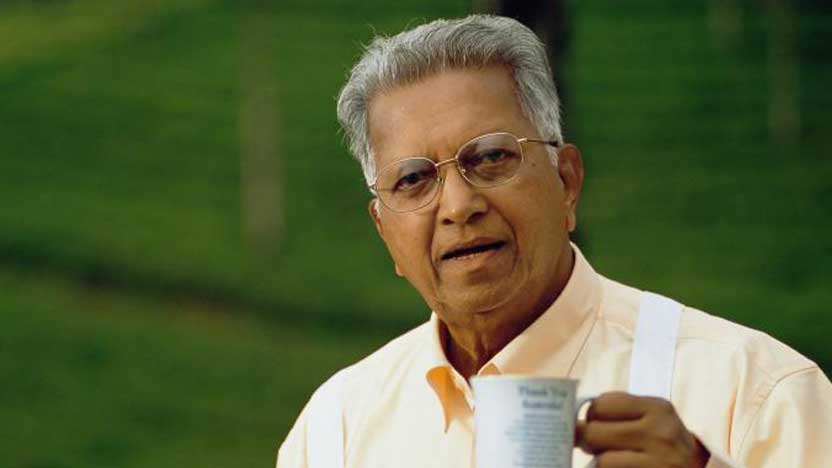 Dilma founder Merrill J Fernando has asked the government to avoid meddling with plantations and allow an independent authority led by ex-planters to run the industry, as the ‘golden shareholder model’ introduced three decades ago has failed to find answers to the key issues plaguing Sri Lanka’s plantation industry.

“Government should shed its control of the plantation industry and entrust it to a ‘Plantations Authority’ for progressive administration and management, under a clear mandate”, Fernando told shareholders of Dilmah Ceylon Tea Company PLC, of which he is the Chairman, perhaps in response to the PMs intentions for more State control over the plantations.

“It is impractical for the government to control the largest industry in the country, while talking of handing corporations over to the private sector”, Fernando added.

Under the 1992 privatization programme of the United National Party government, RPCs were given total management control over tea, rubber and coconut plantations owned by the government while the state retaining the golden shareholder ownership.

However, following the introduction of this model, the plantations ran into a plethora of issues relating to mismanagement, exploitation and certain RPC’s neglecting the well being of the estates. Hence, Fernando advocates for the taking away of estates from the RPCs who have “ruthlessly exploited them” and entrusting them with companies which have a genuine commitment to the industry.

“In doing so, clear guidelines and directions on management and development should be in place. Monitoring of their performance should be entrusted to ex-planters who still have love and passion for plantations, to which they devoted the better part of their lives”, Fernando added.

Meanwhile, he hinted at the forthcoming fiscal reforms which will effectively take away the incentives thus far offered to the exporters of value added tea.

“The revisions to the fiscal regime that are currently being considered by Parliament propose to roll back those incentives, failing to recognize the substantial direct and indirect benefits to the national economy from genuine value addition”, Fernando said probably taking aim at the new Inland Revenue Bill to be presented in the Parliament soon.

Value added tea exporters such as Dilmah has been receiving incentives from as early as 1980s to discourage the export of tea in bulk form.

“Too many exporters supply Ceylon Tea at prices close or below the cost of production, and need incentives to recognize and reward genuine value addition”, Fernando said.

Meanwhile, the tea sector veteran who was instrumental in placing Ceylon Tea brand in the global map said that, “supplying value added tea, under importers’ brand names is far worse than supplying tea in bulk since such brands become our competitors, sooner or later”.

Although data shows that 40 percent of tea exports leave Sri Lanka in value added form, a bulk of it is supplied under foreign-owned brand names, a practice that is detrimental for building the Ceylon Tea brand.

“In previous statements I expressed that same prediction in connection with the opportunity we had to build a vibrant and high quality Ceylon Tea market in Russia. Regrettably, in the rush to supply own label tea to Russian importers, that potential was lost,” Fernando lamented.

He further called on the authorities to return the cess collected from the industry, without these funds being absorbed by the Treasury depriving the much needed support for the industry in building the quality infrastructure that will help it compete globally and promoting its product.

“That will generate greater revenue and benefit to the Treasury in the long-term than the cess alone could offer in the short- term”, Fernando pointed out.