Press release and images on Tea mogul Merrill J. Fernando: 'I owe everything to Australian consumers' from Dilmah

This Sri Lankan businessman, the founder and chairman of Dilmah Tea, counts his blessings every day. 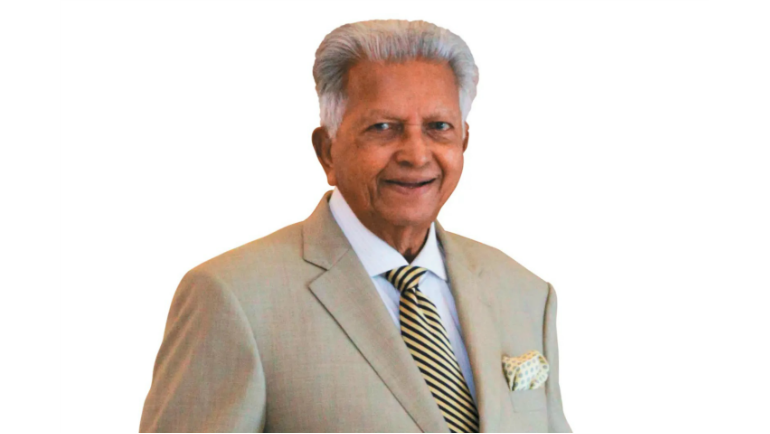 Each week, Benjamin Law asks public figures to discuss the subjects we're told to keep private by getting them to roll a die. The numbers they land on are the topics they're given. This week he talks to Merrill J. Fernando. After high school, this businessman was one of the first local people in the then British colony of Ceylon to train as a tea-taster in London. At age 58, he launched his own brand of tea, Dilmah, in Australia. He is now 90.

MONEY
You were born in a small fishing village in Sri Lanka (then Ceylon), the youngest of six. Did you grow up poor or rich? We were an upper-middle-class family, quite comfortable. We had all the things we needed: property, extra land, a few acres of coconut grove.

What did your family do for work? My great-grandparents were ayurvedic physicians. My grandmother treated people for asthma and eye troubles. I remember seeing queues and queues of people watching how she treated people. My father was a small-time businessman, supplying construction companies with bricks, and my mother taught me everything I know now.

What did she teach you specifically? She was very particular about looking after poor neighbours. Every time I got something nice – sweets, chocolates, cakes – my mother would cut it in two and take half of it to give to the village’s poor children. I used to cry, “You take your own stuff to them; not mine!” She took no notice. Caring for the neighbours and sharing with the poor has stuck deeply in my mind ever since.

Later in life, you were tasting, trading and learning about tea in London’s Mincing Lane. What did you learn about business and money? This was during the period when Sri Lanka was still a British colony. The coloniser’s sole objective of the colonies was for us to produce raw materials: tea, rubber, coconut, steel. Mincing Lane in London was the tea centre of the world, but it’s 19,000 kilometres away.

… From the actual tea. Yes! And when I watched what was happening, I said, “This cannot be real.” They’d give a farmer 50 cents for a kilo of tea; barely enough to eke out an existence. Then they would mix Ceylon tea with tea from other regions and market it as “Ceylon Tea” – because Ceylon tea is known as the world’s finest – at 20 or 25 times what they paid the poor farmer! They exploited our tea farmers, their families and workers – and equally the consumer – by telling them lies. So 34 years later, I launched Dilmah tea in Australia. But my god, what a hostile reception I had from the industry here!

How did it manifest? Competitors said, “This is a third-world unhygienic product being dumped here!” The chairman of the then Australian Tea Alliance threatened me. “We will get your brand out of the supermarket.” But the consumers fell behind me. I owe everything to Australian consumers. Now I bring fresh, single-origin, undiluted tea to Australia and share my earnings with the poor through our foundation [the MJF Charitable Foundation]. And now we have a global brand.

It’s a family business, and your son recently took over as CEO. Is mixing family with business a good idea? In our case, it’s the best thing that could ever happen. My son is part of the second generation; the third generation is equally keen and will join the business in the next two years. We have a family charter which says not a single share can be sold outside the family. We have had offers, but our business is not for sale. Never.

You’re 90. What wisdom can you impart for younger people when it comes to love, sex and relationships? Love and relationships are sacred to people. If you love a man or a woman, as the case may be, do it wholeheartedly. Don’t be distracted.

What were you told about sex growing up? We had village parents; they’d never discuss that. But sex is something that we all experience sometime or other, before marriage, after marriage, sometimes outside marriage. But ultimately, it is something really sacred to the family. If you drift away, you’ll find a casualty somewhere.

Did you ever have to have that awkward conversation with your children about the birds and the bees? No, I sent them to a Jesuit boarding school in England at the age of 11!

RELIGION
Sri Lanka is home to many religions. Do you adhere to any of them? Christianity. It is the good Lord who led me all the way from the time I was in the little village. He taught me to praise and worship him, and in return, he gives me everything I need and deserve.

How does Christianity inform your daily life? When I wake in the morning and I’m seated in bed, I thank Jesus for all the blessings I receive daily. The last thing at night, I thank him the same. I am very conscious that God is guiding me.

Outside of religion, what else do you believe in? What grounds you? There’s one thing I believe: do not envy. It’s a small society when that happens. But I find that if you wish everybody well, all the blessings will come from God. Even enemies trying to destroy you can’t touch you. Wish everybody well.

What’s the meaning of life? Life is an opportunity for you to do good. Show people around you the good things in life without envy, jealousy or creating enemies.

The Original Article was Published by The Sydney Morning Herald