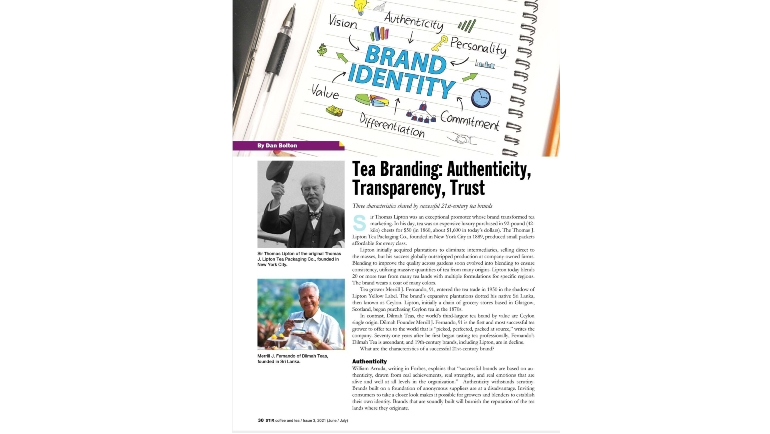 Sir Thomas Lipton was an exceptional promoter whose brand transformed tea marketing. In his day, tea was an expensive luxury purchased in 92-pound (42- kilo) chests for (in 1860, about ,600 in today’s dollars). The Thomas J. Lipton Tea Packaging Co., founded in New York City in 1889, produced small packets affordable for every class.

Lipton initially acquired plantations to eliminate intermediaries, selling direct to the masses, but his success globally outstripped production at company-owned farms. Blending to improve the quality across gardens soon evolved into blending to ensure consistency, utilizing massive quantities of tea from many origins. Lipton today blends 20 or more teas from many tea lands with multiple formulations for specific regions. The brand wears a coat of many colours.

Tea grower Merrill J. Fernando, 91, entered the tea trade in 1950 in the shadow of Lipton Yellow Label. The brand’s expansive plantations dotted his native Sri Lanka, then known as Ceylon. Lipton, initially a chain of grocery stores based in Glasgow, Scotland, began purchasing Ceylon tea in the 1870s.

In contrast, Dilmah Teas, the world’s third-largest tea brand by value are Ceylon single origin. Dilmah Founder Merrill J. Fernando, 91 is the first and most successful tea grower to offer tea to the world that is “picked, perfected, packed at source,” writes the company. Seventy-one years after he first began tasting tea professionally, Fernando’s Dilmah Tea is ascendant, and 19th-century brands, including Lipton, are in decline.

What are the characteristics of a successful 21st-century brand?

William Arruda, writing in Forbes, explains that “successful brands are based on authenticity, drawn from real achievements, real strengths, and real emotions that are alive and well at all levels in the organization.” Authenticity withstands scrutiny. Brands built on a foundation of anonymous suppliers are at a disadvantage. Inviting consumers to take a closer look makes it possible for growers and blenders to establish their own identity. Brands that are soundly built will burnish the reputation of the tea lands where they originate.

The conversion of many traditional orthodox tea factories to the more in- industrial CTC [cut, tea, curl] manufacture, in an uncritical emulation of the Kenyan model, would have become a reality decades ago if not for Fernando’s reasoned but unrelenting opposition. Had that proposal been implemented, the diversity of Ceylon tea, its uniqueness, would have been obliterated by the depressing sameness of a mass-market production without individuality.

Jing Tea founder Edward Eisler agrees. Tea companies that blend teas from multiple origins result in a tea “that doesn’t reflect the true character of anywhere,” and he told Hotelier Magazine that the character and flavour of a tea should reflect the origin of where the tea is grown and the production methods local to that origin.

Professor Philip Kotler at the Kellogg School of Management, a pioneer of modern marketing, observed that “the success of Dilmah... cannot be separated from the authenticity that the brand stands for”. In describing the brand’s success, he cited six characteristics: “pure Ceylon tea, unblended tea, freshness, single origin tea, passionate tea maker, ethical business practice, traditional methods, finest quality, natural goodness, and a pioneer in the tea industry. These in-built authenticities have eventually become the company’s brand DNA,” he said.

Large, powerful, and intractably indivisible tea brands rested their reputation on a foundation of nameless growers, wholesalers, and blenders for two centuries. Fearful of competitors and the pricing power that it affords suppliers, tea brands went to great lengths to conceal their relationships.

Concealment today is untenable. Transparency is established consumer behaviour, accelerated by the pandemic but trending long before 2020. In 2018, every major tea brand in the UK was pressed by the Traidcraft Exchange to reveal the growers and contract blenders by region and farm. Yorkshire Tea was the first major brand to publish its complete list of suppliers. Twining’s followed, then Tetley, then Clipper.

In September 2019, Unilever, a company that buys 10% of the world’s tea supply, indirectly employing 1 million in 21 countries and generating billion in sales, revealed its suppliers in a consumer-friendly online page and downloadable PDF. Andrew McNeill, business development director at Seven Cups Fine Chinese Tea in Tucson, Ariz., says a company’s tangible commitment to transparency is an affirmation of a company’s responsibility to its suppliers and customers... “it is also in a tea business’ financial best interest. Supply-chain details are an essential part of the product’s value, an extension of the product’s value,” writes McNeill.

He adds that consumers (particularly of gourmet, health, and luxury goods) “readily view the supply chain as an extension of the product they buy. This is forcing merchants to re-evaluate the information that has traditionally been regarded as trade secrets. Now, those secrets about your supply chain may actually be more valuable to your business as openly available information.”

Many merchants feel threatened by this pressure to embrace transparency, particularly merchants who do not have the time or resources to invest in their direct-sourcing operations, says McNeill. “To the contrary, I’d argue that these vendors should not underestimate the value their business offers as a trusted curator. To sophisticated consumers, your choice to disclose your partners in your supply chain builds trust and goodwill that is attached to your business, first and foremost. A cafe owner who diligently maintains product quality by working closely with her suppliers ought to make this known — doing so is a concrete demonstration of the value she adds with her careful attention to the supply chain. Consumers are now poised to recognize her for it.”

Loomly, a social media marketing platform, describes “brand trust as the most important quality that you need to develop as part of your brand strategy. Consumers need to trust that your brand will deliver on its promise in every interaction, or they’ll search for another brand that does meet their expectations.” Brand loyalty declined during the pandemic, according to McKinsey Research. McKinsey reports that globally 60% of consumers have changed their shopping behaviour and that 75% of Americans changed brands during the pandemic. Brian Gregg, a senior partner at McKinsey and co-leader for North America marketing and sales practice writes that researchers globally observed a significant change in consumer behaviour. He identified five trends: a shift to value and essentials; flight to digital and omnichannel; shock to loyalty; a focus on health and ‘caring’ economy; and homebody economy.

This amount of change in brand loyalty is unlike any period, Gregg told ZDNet. “During these trying times, consumers have a heightened awareness of how businesses interact with stakeholders, local communities, and society more broadly. The actions that businesses take during this pandemic are likely to be remembered long after Co- vid-19 has been conquered,” according to McKinsey research. Arruda concludes that “branding is the key to differentiating yourself from the competition, but if you don’t build your brand promise around reality or consistently live up to it, your branding efforts are pointless. Brands are built through the consistent delivery of the brand promise through all stakeholder touch points. It is the consistent, desired experience that builds trust and trust is the foundation for loyalty and promotion.

This article was taken from the Stir coffee and tea magazine