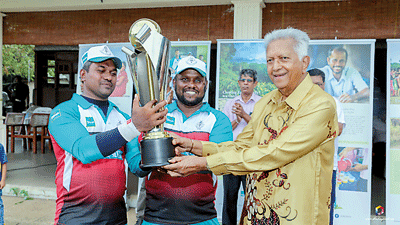 Both teams comprised of players with varied stages of visual impairment, from partially sighted (B3) to partially blind (B2) to totally blind (B1).

Taking first lease of the wicket Shakthi scored a respectable 215 in 27.3 overs. Opener Saman Thushara (B2) top-scored with a fine 78 runs, while Damith Thushara (B1) contributed a useful 26 to be the main scorers for Shakthi. Team Ranaviru bowlers attacked to a set plan, resulting in the strong Shakthi batting line having to earn their runs. Right-arm medium-fast bowler Dimuthu Ravindra (B1) was the most successful bowler with 3 for 31 off 5.3 overs, while Saman Kumara (B1) too bowled a nagging length to claim 2 for 35 in 5 overs.

Chasing the victory target Team Ranaviru batters too found run-getting a difficult task against a well balanced bowling attack. The winners were in trouble with 9 wickets down for 189 in the 26th over. Ranaviru’s last pair Dimuthu Ravindra (B1) and Senarath Bandara combined to guide their side to victory with an unbeaten 26-runs fighting partnership. The fighting qualities displayed by the last pair was commended by everyone present at the grounds.

Earlier in the inning, K.A. Silva (B1) laid the foundation with a timely 50, followed by notable contributions from Sahan Kumara (B1) 34 rums and N.S. Malcolm (B2) 18 runs. Shakthi’s medium paceman Upul Sanjeewa (B2) bowl best to claim 3 for 26 off 6 overs.

Dimuthu Ravindra (B1) was adjudged Man of the Finals for his all-round capabilities.

Chandana Kumara of Shihashakthi (B3) (391 runs including 2 centuries), Upul Sanjeewa (B2) of Shakthi (157 runs and 8 wickets) and Ranaviru’s T.D.K. Sahankumara (B1) (122 runs with a century and 4 wickets) were awarded “Men of the Tournament’ trophies.

This year’s tournament had over 180 players participating in 29 matches played in Colombo and Moneragala over 60 days.

An event supported by Dilmah since 2005, the National Blind Cricket Cricket Tournament is a celebration of the capabilities and the sportsmanship of the visually impaired spread across the country through the game of Cricket. The tourney gives all teams registered with Sri Lanka Association of Visually Handicapped an opportunity to participate in a National level Cricket tournament to showcase their talents.