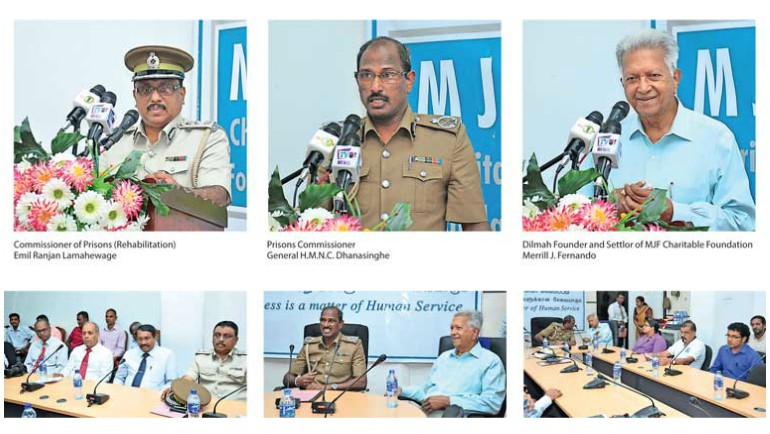 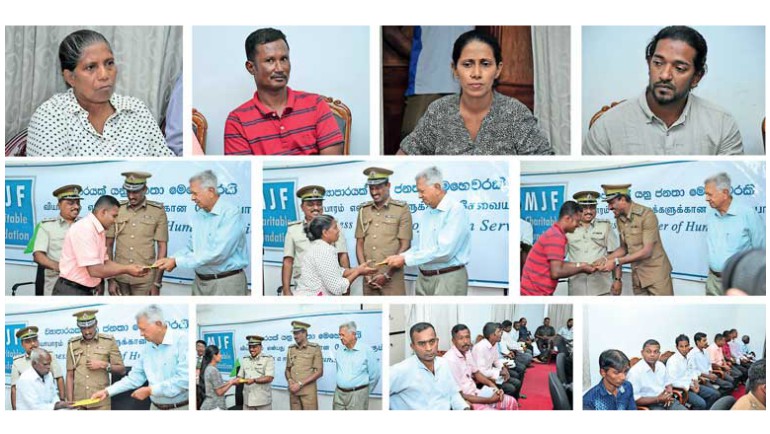 Their eyes are filled with hope for a better future where they regain their lost dignity and respect.

K.M. Ali Khan was late for the function, which had started a few minutes earlier. He had to come to Colombo all the way from Trincomalee that morning. He has served seven years of rigorous imprisonment; was released last year and started working at a resort as a carpenter.

“When I was in prison, I got six months of training in carpentry. It was very useful for me to get a job in this field as I got a good training,” Khan (43), who wants to stand on his own as a carpenter, said.

At the function held at the Prisons Headquarters, Welikada, last week, he received a cheque of Rs. 65,000 to get a toolset to start his own carpentry workshop.

“It was a dream turned into reality for me. I started working at the resort as a carpenter but sometimes still people look at me with suspicion. They think I am still a criminal,” Khan, who was a suspect of a criminal offence committed at the age of 18 years, was convicted for seven years of rigorous imprisonment after going through a 24-year-long legal process that ended in 2014.

He said that he was aspiring to start his life anew and people’s attitudes would fade away soon.

Is it fair enough to isolate a person simply because he or she has a past record of committing a crime? Why can’t society give them another chance to stand on their own feet? These are the questions that linger in one’s mind when meeting ex-prisoners who are being reintegrated into society in line with the parole correctional system of the Prisons Department.

Known as licensed prisoners, 25 prisoners were awarded cheques to start livelihoods on their own under the Prison Reform and Integrated Program, a part of the Merrill J. Fernando Charitable Foundation’s Small Entrepreneur Programm (SEP), on 19 December at the function.

This program focuses on transforming individuals released on parole to rebuilding their reputations within the community and instilling confidence in them to carry on with their lives.

Launched in 2007, it was the first of its kind in the country and 299 ex-prisoners have been provided financial support to start their own livelihood means so far.

Dilmah Founder and Settlor of MJF Charitable Foundation Merrill J. Fernando, giving a brief account on why Dilmah launched the SEP program and why it extended support for licensed prisoners, has requested the 25 beneficiaries to do well to restore their dignity as well as regain their reputation by starting livelihood projects to stand on their own feet.

“This project was started with a great deal of reluctance but the result had been completely the opposite of my expectations. I was encouraged to give more support to the prisoners program. The intention of this program is for people to gain dignity and respect for what they do,” he said.

Fernando said that when he was gaining more profits from his own business, he decided to give more care and provide more support for the needy.

“When I started earning more profits, I had to choose one path out of the two. I could remain a rich man, have more men around me and show off as a very rich man. But, a man from a humble beginning, I chose the second path which was to help and care for the needy,” he said. “I realised that when I was providing more support for the needy I gained more profits every year.”

Motivated with the successful outcome of the first-ever SEP project, which was launched to support the people affected in the tsunami-hit areas, the foundation has helped thousands of people with new livelihood projects.

“Every one of those projects has been 100% successful. The contribution of those SEPs to society and the economy is beyond my belief. When I visit those people, I am very happy as they are doing very well. The prisons program is one of such successful projects,” he said.

Explaining the main intention of launching the SEPs, Fernando said that the Foundation wanted to help the ex-prisoners stand on their own feet with dignity in society.

Fernando said: “Everyone deserves a second chance to change their lives around. I began Dilmah at the age of 58. It is never too late; age, ability, gender and criminal records are immaterial. I also want people to realise that we can’t retain our wealth with us, it should be shared,” he said humbly.

The MJF Charitable Foundation works closely with the Prisons Department to ensure that the Reform and Integrate Programme objectives are fully realised and that every prisoner who wishes to be rehabilitated will be supported to establish themselves in a suitable livelihood with support from the Foundation.

Ten per cent of all proceeds of Dilmah’s global sales are diverted to the MJF Charitable Foundation and Dilmah Conservation.

Commissioner General of Prisons H.M.N.C. Dhanasinghe said the department was committed to correct those who were sent for punishment for committing various crimes and the department had reintegrated the prisoners to the society as peaceful citizens.

“Over 55% of the prisoners are not criminals and they are the people who are addicted to drugs, alcohol and various other forms of addictions. These people are not threats to others in the society but risk their own lives,” he said adding that the balance 45% are also not organised criminals but imprisoned due to some crimes committed due to sudden anger, poverty and poor psychological conditions.

The Prisons Chief said that the department, which had an approach that targeted improving vocational training, education, cultural and spiritual aspects, was not geared to relieve the psychological stress of the prisoners.

He revealed that prisoners who were given long-term imprisonments had zero comeback but those who were serving short jail terms for drug offences recorded high re-imprisonment rates.

“We have reports that when the father is in jail for a drug offence, the drug dealer looks after the family and the chances of a family member entering prison on drug-related offences are high. This is a very pathetic situation. We want to break this vicious circle and have designed several programs with the help of private sector companies like Dilmah to help the children of prisoners. We now target the children in their families,” he said, adding that the department was exploring the possibilities of finding job opportunities for the children of those prisoners to empower them as well as save them from drug dealers.

“I received training in sewing for six months under the vocational training scheme at the prison. I wanted to start a home-based small business to stitch clothes in my village,” said Damayanthi, a mother of four young children.

She lives in a small rented house and wants to earn some additional income to support her husband who earns a living as a mason. Thanking the foundation, she said she got financial support to buy a sewing machine and it was a big support for her to earn a living.

Steven Anandakumar (40), an ex-prisoner from Badulla, got financial support from the Foundation last year to buy a welding machine.

“Two people are now working under me and I was able to construct a small building for my workplace at Poowakgodamulla, Badulla. I was given welding training when I was in the prison,” Anandakumar, who served five years in imprisonment, said.

He said that when he returned home after releasing from the prison, people in his village looked at him like he was a murderer and were scared to talk to him or invite him to their houses.

“When I started my business and was doing well as a peaceful citizen, the misconception gradually faded away from people’s minds. I feel I have dignity and they respect me now. They look at me differently now,” Anandakumar said.

Click here to view original article published in the DailyFT