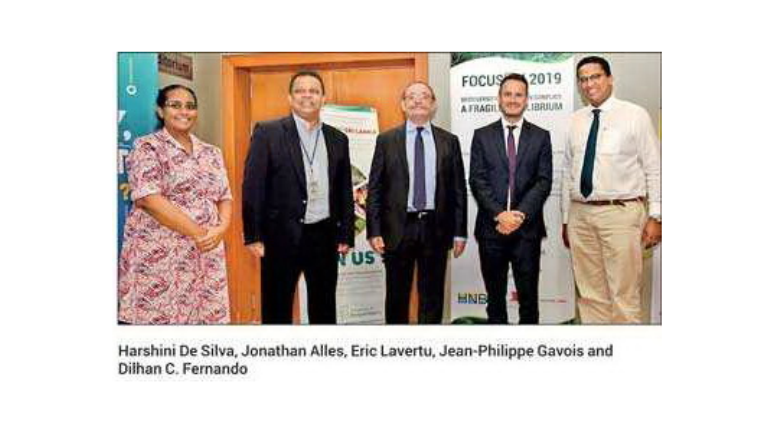 The International Day for Biological Diversity (IDB) is celebrated annually the world over, on 22 May, commemorating the adoption of the text of the Convention on Biological Diversity (CBD). It aims to leverage knowledge, spread awareness and celebrate the diversity provided by our natural systems for life on earth and well-being.

This year, Biodiversity Sri Lanka (BSL) commemorated the day by organising a celebratory event together with the Embassy of France to Sri Lanka and the Maldives, in association with its Patron Member – Hatton National Bank PLC (HNB). The event coincided with the launch of the French Embassy’s FOCUS-LK 2019 – an annual event implemented by the embassy in celebration of a selected theme of common interest to both, France and Sri Lanka. The theme for FOCUS-LK 2019 is ‘Biodiversity and Human Conflict: A Fragile Equilibrium’.

The event kicked off with a warm welcome of the packed audience, by Jonathan Alles–Chief Executive Officer/Managing Director, Hatton National Bank PLC and Former Board Member of BSL. Alles noted that the event is an opportunity to showcase the global significance of biodiversity and how we all need to come together across local and national boundaries, to address issues that affect us all in the same manner, irrespective of our differences. He also enlightened the audience on HNB’s continued commitment towards biodiversity conservation in Sri Lanka, which is demonstrated through the various initiatives the bank has taken up on its own, as well as in collaboration with BSL throughout the years.

Ambassador of France to Sri Lanka and the Maldives Eric Lavertu, then addressed the audience, highlighting the significance of the relationship that the French Embassy has established and developed over the years, with BSL. He noted that France, as a country has continued to work on environmental and climate change issues, contributing globally towards significant steps forward in terms of tackling the very real challenges that the global population faces today. He introduced the speakers of the evening – Dr. B.R. Ramesh from the French Institute of Pondicherry in India and Dr. Prithiviraj Fernando from the Centre for Conservation and Research in Sri Lanka – whose presence at the event were supported by the embassy.

Dilhan C. Fernando – Chairman of the Board of Directors of BSL and Chief Executive Officer of Dilmah Ceylon Tea Company PLC, then delivered a short summary on recent collaborations between the French Embassy and BSL. He brought to the attention of the audience that these collaborations were kick started with the delivery of the keynote speech by Jean-Marin Schuh – the Former Ambassador of France to Sri Lanka and the Maldives – at BSL’s second Annual General Meeting held in 2017. He stressed that the two organisations’ collaborative efforts have paved the way for some innovative work in the field of marine and coastal conservation in the East coast of Sri Lanka and has created a lot of awareness amongst the general public and relevant stakeholders, on matters relating to biodiversity and the environment.

Dr. B.R. Ramesh was then invited to deliver his presentation on ‘Comprehensive Ecological Information Systems for Biodiversity Conservation and Management’. Dr. Ramesh spoke of how various information systems were being made use of for research activities within and the conservation of the biodiversity hotspot – the Western Ghats of India – his area of specialisation. He also spoke of how numerous data sources were being harnessed for the benefit of these activities through the application of these technologies and how they have expanded the scope of positive work being carried out to protect this global treasure.

He then introduced the concept of the India Biodiversity Portal and elaborated on how such a portal for Sri Lanka, can also benefit conservation-related work and act as a repository of knowledge for the benefit of personnel working in this area. Dr. Ramesh concluded his presentation by highlighting other technological applications and citizen science initiatives that are being used in India, and by recommending such applications to be used in Sri Lanka for the conservation and management of biodiversity.

Dr. Prithiviraj Fernando then followed suit to enlighten the event participants on ‘Elephant Conservation and Human-Elephant Conflict Mitigation’. He stated that Human-Elephant Conflict or HEC, is the biggest challenge confronting Asian Elephant conservation, especially in Sri Lanka. Asia, having a very high density of people and an extremely rapid population growth rate, is bound to openup more and more land area for human settlements. As such, elephants are losing ground and habitats that can feed and maintain their lifestyles optimally.

He stated that due to this situation, more than two thirds of elephants in Sri Lanka live outside of protected areas. This paves the way for much conflict between the two species and a number of methods have been applied to minimise the conflict – some humane and some not so. Dr. Fernando elaborated on the pros and cons of elephant translocation, elephant drives, electric fencing, etc. as potential methods of HEC mitigation but concluded stating that given the scale and intensity of the current situation, the only and best way to overcome challenges related to HEC was education and learning to live in harmony with nature.

The two expert presentations were followed by a lively and detailed discussion between the speakers and event participants and the event concluded with a networking session and fellowship.

Please click here to view the article in DailyFT