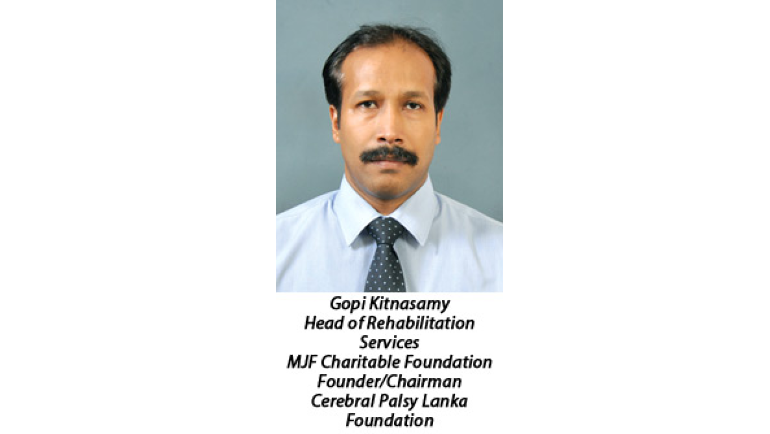 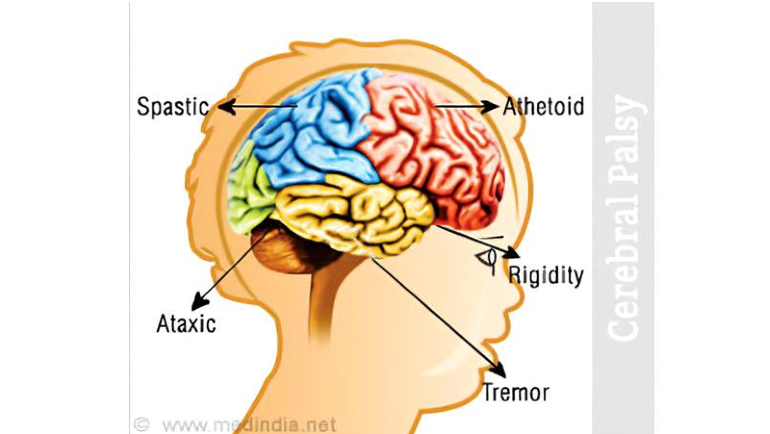 In three days on October 6, health officials, care givers and all those engaged in looking after the needs of more than 17 million persons across the world, whose lives have been drastically changed due to Cerebral Palsy (CP) will come together to try and become catalysts of change to help improve the quality of their  lives.

The Sunday Observer met the founder and director of Cerebral Palsy Lanka Foundation, Head of Rehabilitation Services, MJF Charitable Foundation and  National Centre for Children with Cerebral Palsy and other Developmental Disorders (NCCCPDD) which was set up solely to cater to all the needs of a child afflicted by CP under one roof, Dr Gopi Kitnasamy to get better insights into what CP means, how it is caused and how it affects those afflicted by this condition.

Q: As CP is not so common as most other crippling diseases, tell our readers what it is and how it is caused.

A: There is no single cause for Cerebral Palsy. However, CP is the most common physical disability in children. It affects their movement and posture. It is a neurological disorder caused by a non-progressive brain injury or malformation that occurs while the child’s brain is still developing.

Q: Can it be prevented and cured if detected early?

A: Unfortunately, no. No new scientifically proven method has been found to prevent or cure cerebral palsy. However, it has been scientifically proved that early diagnosis of the condition will maximise a child’s mobility and potential. Unfortunately, diagnosis is often delayed for a number of reasons. Lack of awareness is an important reason, which is why raising awareness about it is so important.

Q: Who are most at risk of developing this condition? Why?

A: Premature babies, multiple births, infection during pregnancy, mothers with medical conditions, complicated deliveries, severe jaundice and seizures in infants are some of the factors that may increase a baby’s risk of being born with Cerebral Palsy.

Q: How many people are afflicted by this condition globally?

A: There are 17 million (estimated number) people across the world living with Cerebral Palsy (CP). Another 350 million people are closely connected to a child or adult with CP. Four in 1000 births are diagnosed with CP.

Q: How many Sri Lankans have this condition?

A: We are currently working on the statistics. We estimate that there are over 40,000 children and adults with CP in Sri Lanka. In Australia (similar population like us), there are 34,000 registered people with CP.

A: Like other conditions, the severity can vary from very mild to very severe. So sometimes the mild ones go unnoticed. With the social stigma, many children with CP are kept housebound. You don’t see them often in society.

Q: How and when does CP begin developing in the human body?

Q: Percentage–wise, how many children have congenital CP?

A: Seventy percent of all Cerebral Palsy diagnoses are diagnosed as congenital.

Q: What is acquired CP?

Q: If a mother gives birth to a baby with CP, will she always give birth to babies with this condition? What are the risk factors?

A: No, unless there are genetic contributions. Risk factors do not cause Cerebral Palsy. However, the presence of some risk factors may lead to an increased chance of a child being born with CP. Some of the factors identified are:

A recent study has identified the familial recurrence of athetoid type of Cerebral Palsy which is a common type of CP in developing countries such as Sri Lanka. We have seen several families with more than one CP child in Sri Lanka.

Q: What are the early signs of CP?

A: The most common early signs of CP are developmental delays in reaching key growth milestones, such as rolling over, crawling, sitting and walking. While lifting or carrying, there can be variations in muscle tone, such as being either too stiff (spasticity or spastic) or too floppy. Sucking and feeding difficulties, difficulty in holding the head upright, excessive crying, lack of attention, favouring one hand over the other (stiffness on the other side) are the other common signs.

Q:  How does early detection help?

A: Early diagnosis hastens the onset of therapy and treatment, ultimately minimising resultant impairments, preserving cognitive function and allowing time for the child and parents to adjust. Unfortunately, diagnosis is often delayed for a number of reasons.

Q: What are the new breakthroughs regarding early detection, preventing and treating CP globally?

A: Accurate early diagnosis using General Movement Assessment and Hammersmith Neurological examinations, early interventions and identification of genetic factors are the latest breakthroughs. The General Movements and Hammersmith Assessments are non-invasive and cost-effective ways to identify neurological issues which may lead to CP and other developmental disabilities.

Q: What are the most negative impacts of CP as it progresses?

A:  Cerebral Palsy can affect a person’s posture, balance and ability to move, communicate, eat, sleep and learn. The parts of the body affected by CP, the level of severity and combination of symptoms can differ for each person. Contractures of the muscle tissue due to severe tightening of the muscle (spasticity), which can inhibit bone growth, cause bending of bones and result in joint deformities, dislocations and partial dislocations.

People with CP may experience uncontrolled or unpredictable movements, muscles can be stiff, weak or tight and in some cases, people have shaky movements or tremors. Those with severe CP may also have difficulties with swallowing which can cause aspiration and lead to pneumonia, breathing problems, head and neck control, bladder and bowel control, poor eating which can lead to malnutrition and have dental and digestive problems.

Q: What are the recent interventions introduced at your centres to overcome these difficulties?

A: We provide special education with individualised educational plans using the local curriculum and all the necessary and appropriate evidence based therapies needed for these children which are provided by a trained and experienced multidisciplinary team.  We also have introduced early identification and early intervention program for infants as the first five years of life is critical and the brain’s response is much better. We have commenced vocational training for youth and adults with CP at our centres, but is still in its early stages. We will introduce some new training programs soon.

Q: What are the other initiatives taken by the MJF Foundation and NCCCPDD to help these children and their families?

A: Our initiatives to improve the lives of those with CP and their families include provision of special education and therapy services for children with CP, training and awareness programs for the people as well as educators and professionals who want to update their knowledge on CP, advocacy for persons with CP and providing wheelchairs and other mobility devices around the country for those with CP.

Q: Today, we live in a post lock down hi tech society. What benefits did the MJF Foundation and the NCCCPDD offer and pass on to children with disabilities during the lockdown?

A: During the Covid-19 lockdown, we introduced tele-therapy and education services for the students at our centres. Upon seeing the benefits of it, we decided to expand the service to the children in all districts of Sri Lanka. The Disability Screening app which was launched on October 6, 2020 to celebrate World CP Day, aims to share knowledge, therapies and services for the people with disability, especially children in regions where access to transport, regular therapy and other services are limited.

The app includes guided disability and development screening, early identification, referral services to connect them with the Paediatricians and other specialists, early identification and intervention and tele-therapeutic, educational and rehabilitation assistance, allowing caregivers to monitor progress with the guidance from the MJF Charitable Foundation’s multidisciplinary team. The app is available for both android and I-phones and is available free to download on the Google Play and App Stores.

Q:  As a parent of a child with CP, what is your message to other parents?

A: Accept the truth.  Learn and understand more about your child’s condition. Focus on early interventions. Be part of the intervention program. Never get discouraged, be part of parent support groups.  Remember education plays a key role in maximising his/her potential and cognitive development.

This article was taken from The Sunday Observer