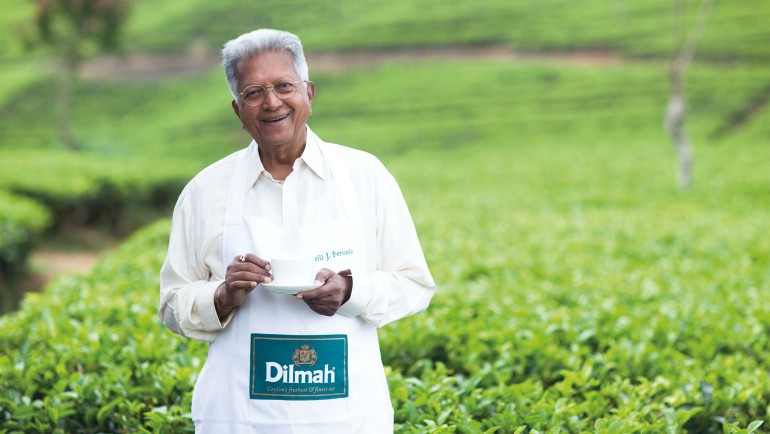 The man who created history in the tea industry in Sri Lanka asserting that the future of the industry lies in the concept of marketing tea as ‘Pure Ceylon Tea’ continues his success not only in business but human service.
Merrill J Fernando, the creator of ‘Dilmah Tea’, believes that the duty and obligation of every enterprise which earns an income is to share part of that income with the poor in this country – a concept he has silently followed over the years and earned heavy dividends.
“You earn more and more and you give more and more, results in your business prospering more and more,” he said.

As the Founder and Settler of MJF Charity Foundation, he made these comments at the ‘Prison Reform and Integration Programme’ held on Tuesday at the Colombo Prison Headquarters.
The programme focuses on transforming individuals released on parole from the correctional system of the prison to lead productive lives by re-building their reputation within the community and instilling confidence in them to carry on with their lives.
It is funded by the MJF Charity Foundation and carried out with the Sri Lanka Prisons since 2007 and now in the 10th year. So far 274 former prisoners have benefitted and the MJFC Foundation so far has spent Rs. 15 million – one third of their estimated charity programme.
The combined efforts have been a success while in monitoring of the programme it was found that every participant has successfully blended into society. A notable achievement is that no participant in this entrepreneur programme has returned to prison. Every prisoner who wishes to be rehabilitated will be supported to establish himself in a suitable livelihood with the support of the Foundation.
Mr. Fernando said that these unfortunate people are rejected when they come back to the society from the prisons and look at them with squint eyes.

“So, it is not only our duty, but also our obligation by the society to help them to maintain the human dignity and self-esteem and to find a decent living to gain their place in the society that they lost when they were incarcerated,” he said.


N.M.N.C. Dhanasinghe, Commissioner General of Prisons said that a wrong notion is created in the public mind that the prison is punishment cell and just another government department, which is rather a wrong notion.


Prisons are a correctional centre and inside it they train the inmates in various trades in the hope that they go back and fit into the society they left and make a living and lead a descent life, he said.
Mr. Dhanasinghe pointed out that a major hindrance for prisoners to get back into the society is the public perception and they are treated like outcastes and total rejected from the society.


He urged the media to remove this perception of bad impression of prisoners who are released and establish their human dignity so that they could become valuable citizens again.