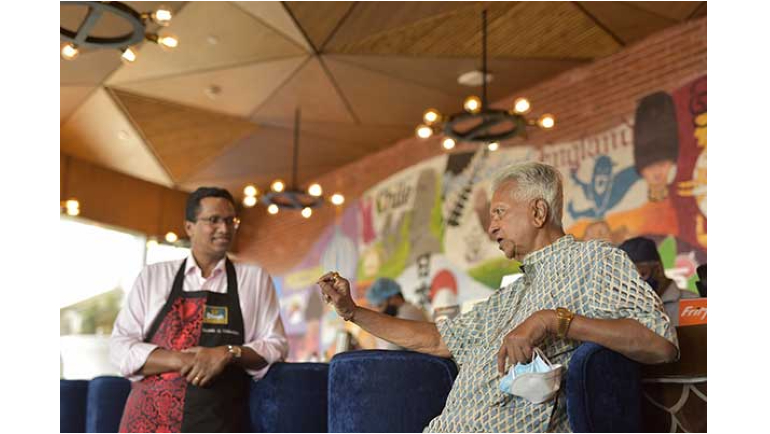 The well known Dilmah tea brand has crafted what it calls the “next generation of Chai” (Hindi for tea) blending Ceylon Tea and Kithul treacle, the company announced last week.

The launch happened at the t-Lounge & Bar by Dilmah at One Galle Face Mall last Saturday serving a cuppa produced by “blending the country’s most celebrated brew with its most celebrated treacle.”

“The chai that takes pride of place among this ‘upscaled’ new lot is the Kithul Chai, which involves a harmonious union between Dilmah’s signature Dunkeld fresh tea and Sri Lanka’s beloved kithul treacle. The chai comes fully equipped with a bite that, too, goes beyond the ordinary,” a company news release said.

This is what it claims to be a “perfectly executed, crumbly kithul scone that has been kicked up a notch with the addition of crunchy kithul jaggery, and a silky-smooth home-made kithul butter, boosted with a dribble of treacle.”

“Together, they make for a well-balanced kithul-rich ensemble that certainly teases to please,” Dilmah said.

Kithul treacle is typically extracted from the flowers of the fishtail palm tree, scientifically known as Caryota urens. Kithul treacle and jaggery also contains a glycaemic index (GI) of between 27-35, compared to a GI of 65 for table sugar and 54 for maple syrup.

The health benefits associated with kithul are numerous and its inherent antioxidant and anti-diabetic properties as well as its ability to boost the synthesis of vital vitamins have made it a popular organic ingredient in ayurvedic medicine for centuries, the release said.

The newly minted teas are served in what the promoters call “subtly vibrant, earthy mugs”. These are carefully handcrafted by the talented women who work at the artisanal pottery centre in Mankada, an initiative of the MJF Foundation to provide an opportunity for skill development and employment for women living around the Udawalawe National Park.

This article was taken from The Island