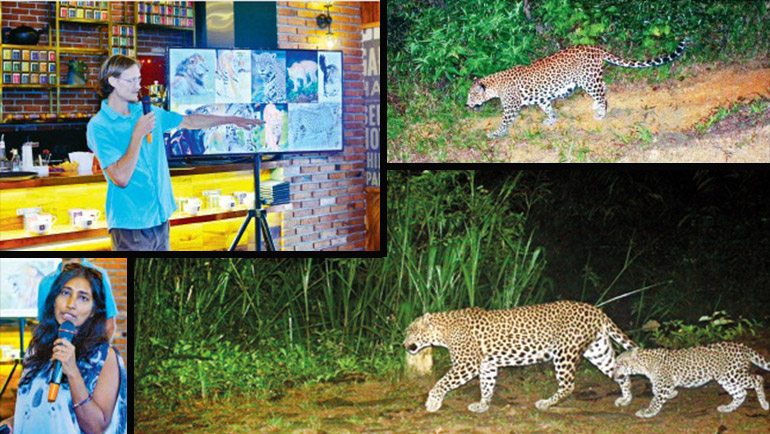 Their love and interest in the Sri Lankan Leopard has taken them to many parts of the country where these animals roam. From tea estates to riverine forests and beyond researchers Anjali Watson and Dr. Andrew Kittle have scaled all areas where the presence of the Sri Lankan leopard is most prominent with the intention of protecting the species and providing them with better habitat facilities in the wild.

Keeping in mind the human-leopard problems reported in the past from the up country areas and the deaths of leopards in the Central Highlands Watson and Dr. Kittle embarked on a mission to conduct a research on the species and find out why these attractive animals are been killed.

“In 2016 leopard killings were reported from the Central Highland area. We started our research in this area to see why the leopards were killed. During our research we found that leopards were caught in snares laid by people in the area. The snares were not laid for the leopards. But the leopards were getting caught in the snares as a by catch. The areas where leopards were killed were not areas where people live but disproportionately in forest patches where wildlife is present. Leopard mortality is not caused by animals coming to human habitation to take dogs or cattle but by humans going into wilderness areas and setting snares. We were looking at how to maintain the leopard population in the Central Highlands. Dilmah provided us with the location because most of the areas where we were planning on doing our research is tea estate land. There is no human- leopard conflict yet, but we have to prevent it from happening in the future. In Sri Lanka only five incidents of human-leopard problems are reported per year whereas in India it is 800 incidents per year. However we have to ensure the co-existence between humans and leopards in the Central Highlands,” Principal Researcher of the Wilderness and Wildlife Conservation Trust (WWCT) Watson said.

She added that a proposed ridge corridor was recommended by them to create a new protected area for Leopard Conservation and Bio Diversity in the Central Highlands of Sri Lanka. “The Central Highlands was declared a World Heritage Site in 2010 because of its unique Fauna and Flora bio diversity and the presence of the Sri Lankan Leopard. The Peak Wilderness Sanctuary and the Reserved Forest is the largest protected area within the Central Highlands. We are currently assessing the population structure and land use attributes of the endangered Sri Lankan Leopard that is present within the unprotected areas of the Central Highlands adjoining the Peak Wilderness Sanctuary. This mixed landscape of remnant forest, tea and other plantations include a ridge which acts as a vital watershed for the adjacent Castlereigh and Maussakele reservoirs. From our ongoing research we have identified this ridge as being a vital connector and residential forest for the leopard because female leopards breed within this ridge forest and male leopards use it as part of their larger ranges. The proposed ridge corridor will act as a vital and additional area for the highland leopards. The ridge will also act as a core habitat for the leopard population within the watershed area and is key to ensuring ongoing human leopard co-existence. It compliments UNESCO’s World Heritage Site designation which lists protecting leopard habitat as key criteria for conferring this status on the Central Highlands,” Watson said.

The overall study area conducted by Watson and Dr. Kittle extends from Hapugastenna in the West to Castlereigh in the North and all the way to the inside edge of the Peak Wilderness in the South and to the end of the Boganwanthalawa Valley to the East.

“All types of big cats are under threat. We had 70 cameras across 25 tea estates. The cameras detected 25 adult leopards that included nine males and 16 females. The cameras also picked up the presence of a few cubs. But we have not taken these numbers into account because leopard cubs are rarely detected on remote cameras and it is expected that there are more within the landscape. We also learnt about the movement patterns of the leopards and that there are reproductive females on the ridge. Leopards can also be used to conserve other species. The Sri Lankan Leopard has an economic value in Sri Lanka. The animal has a high tourism value and can be seen at National parks. The leopard brings in a lot of revenue to the country. Some people are also interested in the leopard but not for revenue purposes. Leopards are top predators in the world. They are stunning beauties and are a charismatic species. These animals have beautiful markings,” Principle Researcher WWCT Dr. Kittle said.

“As part of our research project we checked if there is enough food for the leopards in this area. The answer is yes there is enough food for the animals. We have to maintain a forest area for the leopards to prevent a human-leopard conflict. Corridors for leopard movement are important. People should also stop building houses on the ridge because of the presence of leopards in this area. People should also stop putting their cattle on the ridge areas where leopards can be seen. From the past one and a half years there has been a big change in the attitude of people with regard to the leopards. We also find that leopards are avoiding humans in this heavily utilized agricultural landscape by being active primarily at night. This behaviour means that leopards are opting to avoid humans by using time separation. This adaptive behaviour is the result of the high human presence in this landscape as our research shows that leopard populations in protected areas such as the Wilpattu and Yala National Parks do not undertake such extreme nocturnal behaviour. Human leopard confrontations can be avoided if humans understand the movements of leopards and avoid going out at night,” Watson explained.

Watson said the first phase of the project which includes the monitoring of wildlife and leopard residency within the ridge is complete. “The second phase will include confirmation of boundary lines of the ridge, mapping of the land area under consideration and assessing ownership of the said land. In phase three the legal necessities involved in protecting such an area will be carefully considered and a gazette featuring the new protected area will be proposed. Continued monitoring is required in order to assess behavioural and feeding ecology. This monitoring will be facilitated by the WWCT Field base at the Dilmah Dunkeld Conservation Station. WWCT’s on-going awareness programmes to the tea estate communities and plantation management on the importance of watershed forests, leopards and general wildlife conservation must be scaled up to include the proposed project actions,” she explained.

Watson added that following the completion of the project an awareness campaign must be initiated amongst the tea estate communities to inform them of the newly established protected areas and that the preservation of the ridge will ensure the maintenance of watershed eco systems services, bio diversity protection and specifically help in leopard conservation.

“A targeted proposal has been formulated and in partnership with Biodiversity Sri Lanka at the Chamber of Commerce we hope to see this proposal become a reality with the Department of Wildlife Conservation, Forest Department and other relevant land owners enabling its protection. The ultimate aim of the project is to demarcate and establish both geographically and legally a form of protection for the peak ridge whilst ensuring that long term monitoring continues within the newly protected area as well,” Watson said.