HomePress releasesBid to Save Jumbos From Extinction

Bid to Save Jumbos From Extinction

An Article by Panchamee Hewavissenti published in The Ceylon Today. 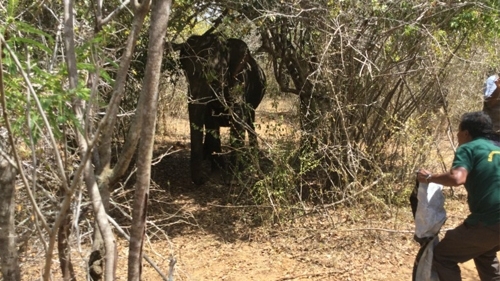 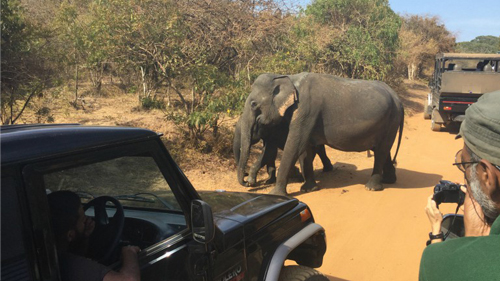 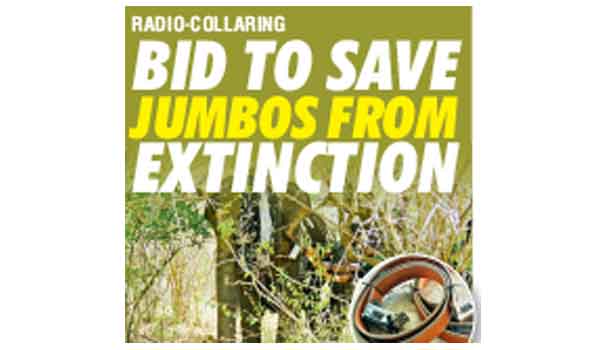 The Department of Wildlife Conservation in collaboration with the Centre for Conservation and Research and Dilmah Conservation embarked on radio-collaring of elephants at the Yala National Park on 12 August on the World Elephant Day in a bid to conserve the elephant population of the country that is rapidly on the decline. Two matriarch elephants that lead two herds were radio-collared on the first day of the programme which was attended by the representatives of the above organizations and many wildlife interest groups. The programme is carried out by the team headed by Dr. Prithiviraj Fernando, Veterinary Surgeon Ananda Dharmakeerti and Veterinary Surgeon Malaka Abeywardene.
The objectives of collaring the elephants are to track their habitats, ranging patterns and issues pertaining to their survival. The radio-collaring of elephants will be carried out for one month and 10 elephants are expected to be radio-collared under the programme.
Director General of Department of Wildlife Conservation M.G.C. Sooriyaarchchi told Ceylon Today that this initiative addresses the need of paying urgent attention to conserving of the declining elephant population by facilitating the monitoring and collecting scientific data on them to accomplish successful management of elephant population.
Endangered
The IUCN (International Union for Conservation of Nature) listed the Sri Lankan elephant (Elephas maximus) as endangered since 1986. The elephant population in Sri Lanka is confronted with the challenge of habitat loss and elephants die due to the scarcity of fodder and also as a result of human-elephant conflict. It is reported that at least 250 elephants in Sri Lanka die annually due to various reasons.
The elephants in the Yala National Park are restricted to the boundaries of the sanctuary owing to human-elephant conflict. Chairman of the Centre for Conservation and Research Dr. Prithiviraj Fernando told Ceylon Today that the elephants in the Yala National Park (YNP) have exceeded the YNP's capacity. As a result, the elephants in the YNP struggles to survive due to the scarcity of fodder.
"Elephants that roam out of the limits of the sanctuary are driven away towards the National Park and electric fences are put up to mitigate the human-elephant conflict. This has compelled the elephants to be restricted to the YNP," Dr. Fernando said.
He further said if the elephants occupy a specific area of the YNP, it can be detected by the radio collar and the living condition of that area can be improved for their benefit. That is one of the advantages of collaring elephants and that will save calves from dying prematurely due to lack of fodder and water.
Human-elephant conflict
During the past 25 years, the DWC radio-collared about 60 elephants. Nevertheless, many collared elephants have died due to various reasons such as accidents and human-elephant conflict.
Radio collars collect information on GPS (Geo Positioning Service) locations of elephants once every four hours. A collar consists of a GPS unit VHF (Very High Frequency) transmitter and a satellite and integrated into one unit. The recorded data are received once in two days via satellite for processing. The researchers and scientists are then able to analyze data and take action.
"If the animals are in distress, we can detect it as the radio signal will remain stagnant at a particular location. Elephants under normal circumstances roam about in large areas. If the movements of the elephants are not recorded and stagnant signals continue to emit, that gives the idea that the animals are staying at the same location due to some adversity," Dr. Fernando said.
He also said if the elephants are approaching human settlements, it can be detected by using the radio collars. Measures can then be taken in advance to prevent them from entering villages and cultivated lands in a bid to protect property from being damaged and the crops from being raided by elephants.
Sedatives
In the process of collaring, the elephant has to be anesthetized. Sedatives are used to put the elephant into a deep sleep and the collar is secured round its neck. Once the collaring is complete, another injection is given to recover the animal from the deep slumber.
The practice of collaring a matriarch elephant that leads the herd aims at observing and keeping track of the all members in the herd.
Elephant herds are generally led by the matriarch elephant which is the oldest female in the herd. Collaring is thereby confined only to the matriarch leader of the herd.
"Elephants mostly occupy poor visibility habitats and roam about in large numbers. Due to conflicts with humans, they naturally avoid human contacts. Hence, it is difficult to observe them directly. Collaring of elephants enables us to obtain accurate data about them.
Management interventions are crucial to conserve elephants and mitigate human-elephant conflict," Dr. Fernando noted.
Dilmah Conservation
A source from Dilmah Conservation told Ceylon Today that the Asian elephant population is on the decline and about 250 elephants are killed annually due to human-elephant conflict. "Studies conducted at YNP have confirmed that over 50 per cent of the elephant calves below the age of five die due to the absence of fodder.
With the intention of mitigating the tragic plight, Dilmah Conservation embarked on the project of collaring the elephants to closely inspect the habits and habitats of the elephants. That will enable scientists and researchers to obtain comprehensive information on the problems faced by the elephants and necessary measures can be taken to conserve the dwindling population of elephants," he said.
Irregular developmental activities have caused the loss of elephant habitats in the country. Habitat loss has resulted in elephants entering residential areas and that has given rise to human-elephant conflict killing about 250 elephants annually. Due to the human-elephant conflict, Sri Lanka has lost over 3,000 elephants during the past decade.
The DWC expects to cut down the number of elephants that die annually due to human-elephant conflict by implementing proper management initiatives.
The data received via the radio-collars will greatly assist them in the management and conservation of elephants in the country confronted with the threat of extinction.
(Pix courtesy: Dilmah Conservation)