Press release and images on "I was merely the postman carrying the message" – Merrill J. Fernando from Dilmah

"I was merely the postman carrying the message" – Merrill J. Fernando

Merrill J. Fernando talks to us about 70 years of tea inspiration with Dilmah, and Life 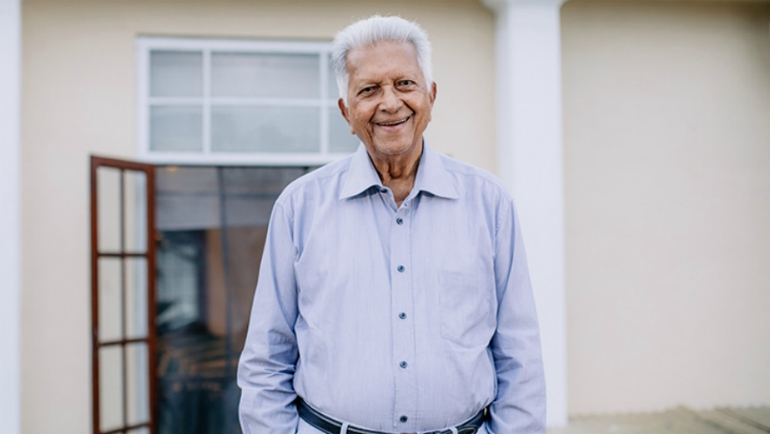 Dilmah Tea is celebrating 70 years of tea inspiration in 2020, and on 6th May, Dilmah’s founding father Merrill J. Fernando celebrated his 90th birthday.

In commemoration of two very momentous occasions, Merrill J. shared with us some of the highs and lows of his journey as a leading entrepreneur in the country, and also shared some advice for anyone looking to follow in his footsteps.

Merrill shared that he didn’t always plan to be in the tea industry; had things gone a little differently, he would’ve become a lawyer.

He said that around the time he received his senior school certificate, the tea tasting and trading industry was under the British, not open to local people. However, as destiny would have it, every year six boys were recruited in the tea tasting business, and he happened to be one of them. He said that it was a very coveted job, too good to pass up, and so he gave up on his plans of becoming a lawyer.

Coming from a small village in Negombo called Pallansena, Merrill said that he had big dreams. However, his quest to market Ceylon Tea was not understood by many. “There was so much opposition from my own country, from all other members of the tea trade. But I gained strength through the trials, tribulations, and displeasure of others, that allowed me to reach the position I am in today,” he said.

He shared that what he experienced during his time learning about tea was the true inspiration to start his own company; he visited plantations where he saw how hard people worked, how much they earned, and learned about their living conditions – he felt they could do better.

Having realised the value of Ceylon Tea, that it is the finest in the world and therefore expensive, he was sure that the Ceylon Tea industry had a big future. “So as a young man, I dreamt of building my own brand. I thought if I had my own brand, I will market it as the best in the world with the finest quality. And also, I would share my earnings with the poor and the disabled. So in 1988, I launched my brand,” he said.

Today, Dilmah is a global brand and the only brand detailing the contents of the tea in each pack. It is a single-origin tea and nearly 99% of the airlines in the Asia Pacific region serve Dilmah on board, while about 60% of hotels in this region serve Dilmah tea.

However, Merrill attributes all his success to the sheer quality of the product. “All the success of Dilmah is due to the power, quality, and image of Ceylon Tea. I was merely the postman carrying the message,” he said.

Everyone talks about the many successes Dilmah has had, but we also wanted to ask Merrill about some of his regrets over the years in maintaining an empire, having also given up law. He shared that not pursuing law had never been a regret and that tea tasting is a noble profession.

However, he mentioned some mistakes that came to mind in terms of his business. “In the 1980s, I got exclusive rights to export Dilmah to Russia and I was exporting huge quantities, but at the time, Russian mafias attacked our distributer and threatened us to the tune of $ 12 million. They took all our tea and about $ 6 million in cash. We had another similar incident about three years later.

“So, I made the big mistake of saying I won’t sell tea to Russia again. One year later, I went back and developed a business, but was unable to get close to how things were before, because the market was invaded by other brands. So that was a major mistake I made; instead of facing the situation.”

In addition to being a commercial juggernaut, Dilmah has always been a socially conscientious brand and Merrill shared how his brand is unique in that he has inculcated in it the philosophy that he believes making business is a matter of human service.

Giving back in that respect, a minimum of 10% in pre-tax profits from Dilmah and related MJF Group companies is used by the MJF Charitable Foundation to implement direct humanitarian assistance programmes around Sri Lanka. The Foundation operates in the most marginalised territories and annually spends over $ 3 million on projects aimed at enhancing the quality of life for differently abled children, youth, and women, while also providing healthcare facilities and nutritional support, and supporting entrepreneurs in replicating the Dilmah story through value addition in their own sectors.

In closing, we asked Merrill what advice he could give to anyone who wished to come even close to the level of success that he has seen, to which he said that having full knowledge of the project you want to do and starting to aim within your reach will lead you to success.

“When you grow, you can think of expanding. After five years, you will be well established,” he said, adding also that most people fail by not properly identifying their limitations and trying to copy what others do, which is a weakness.

The Original Article was published by The Sunday Morning